Madrid, 17 March 2022 | The Spanish Solar PV Association (UNEF) held on March 16 in Seville an open and free conference with the presence of the Andalusian Government, which was attended by more than 120 companies. The objective was to promote sustainability and the criteria of excellence in the environmental and socioeconomic development of photovoltaic plants, as well as to expose the positive experience of specific examples of municipalities in Andalussia. 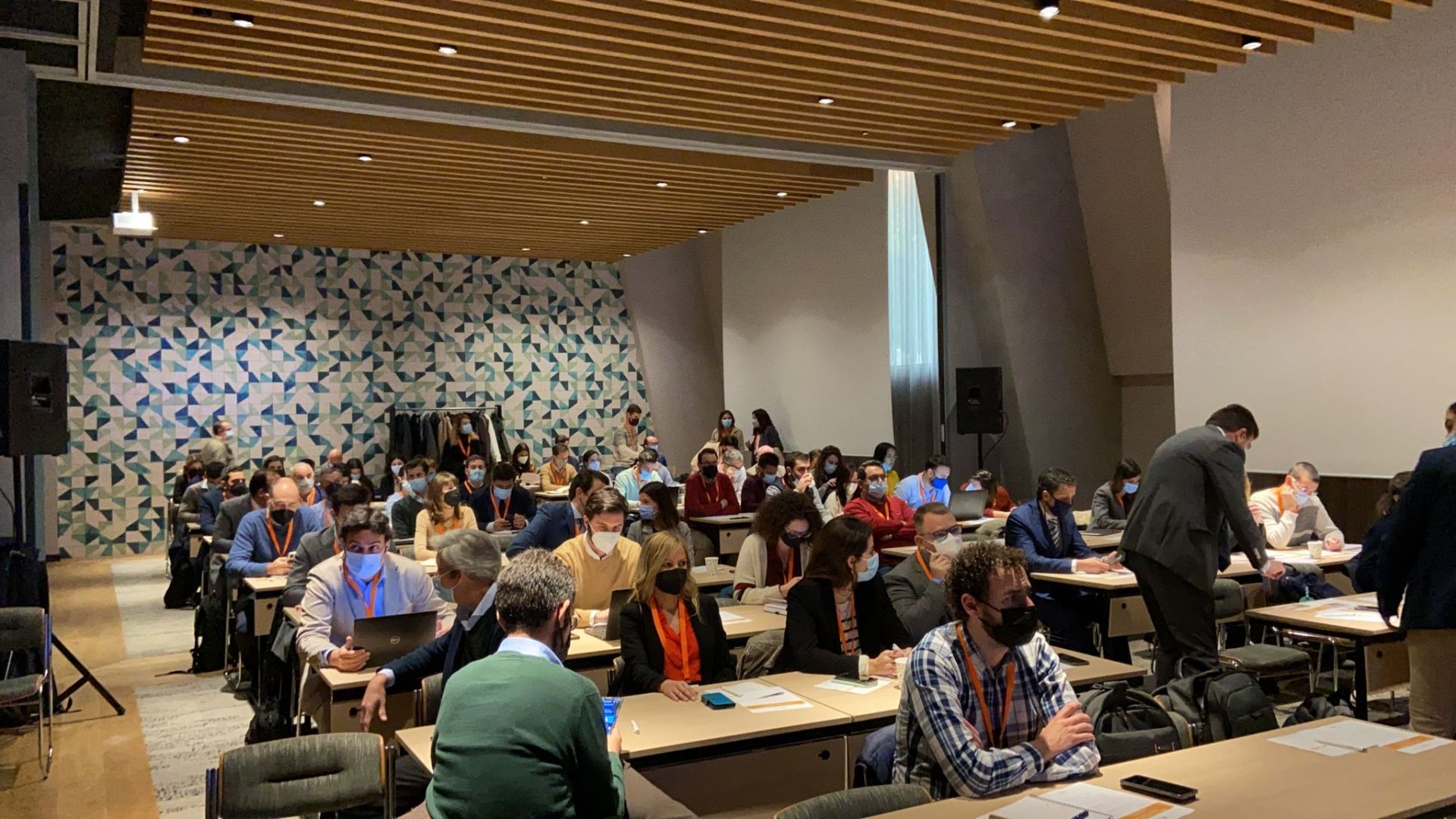 The Best Practices Guide for the development of solar plants was presented at the event, a document prepared by UNEF that includes a methodology for a photovoltaic deployment that follows principles of Creation of Shared Value. In addition, a list of measures is included.

The conference, held in Seville, began with the inauguration by Juan Bravo Baena, Treasury Counselor of the Junta de Andalucía, and Rafael Benjumea, President of UNEF. The Minister pointed out that Andalusia currently has 800 renewable projects totaling 20,200 MW, of which 18,400 MW are photovoltaic. Juan Bravo Baena stressed that “Andalusia must rely on sectors that grow. The energy transition is an opportunity for business, innovation, employment and more trained professionals. The Board has made progress in administrative simplification to boost the market and give confidence to the development of large, medium and small companies”.

On the other hand, Benjumea pointed out that “Nowadays, projects are proposed from a logic of maximum ambition in social and environmental integration”. “The sector is doing a great job and applying increasingly demanding standards”, he defended. “From UNEF we are working and dedicating an enormous effort to facilitating this cultural change by gathering and disseminating the best criteria that every project must apply”, pointed out while stressing that Andalusia is carrying out vital work to promote renewable energies, especially solar.

The first table of the morning dealt with the importance of quality in environmental impact studies. In it, Isabel González Cuenca, Head of the Energy Unit Service of the Junta de Andalucía, stressed that the quality of the project will determine the processing time. The more complete and higher quality you have at the beginning, the less it will extend over time..

Alfonso Lazo Contreras, Technical Director of Asistencias Técnicas Clave, highlighted how the quality and scope of the Environmental Impact Studies of photovoltaic projects have increased in recent years. For her part, Helena Fernández Castro, Sustainable and Climate Change Manager at Isemaren, focused on social analysis and the importance of dialogue with the regional administration and city councils when defining the socioeconomic action plans of the projects.

At the second table, José Donoso, General Director of UNEF, presented the Seal of Excellence for Sustainability and the conservation of Biodiversity in photovoltaic plants that the Association launched last year with the aim of promoting and recognizing projects carried out under the best social and environmental integration criteria. 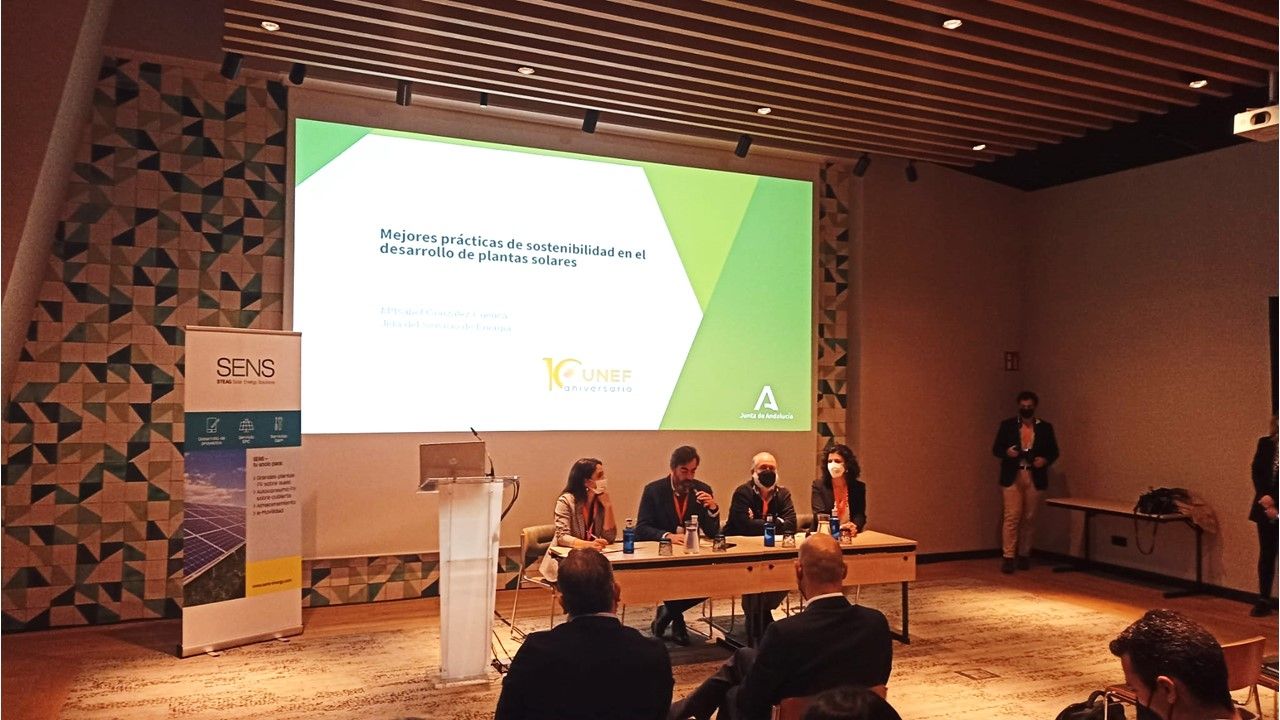 Furthermore, Santiago Martín Barajas, Director of the EMAT consultancy, and author of the 'Biodiversity Study of birds and other species of fauna in three photovoltaic solar installations' pointed out that "large photovoltaic installations, of tens or hundreds of hectares, can become habitat for some animal species" . “We have warned, depending on the environment, that these are places where there is truly fauna,” he added..

Luis Martín Ercilla, Head of Iberdrola for Andalussia, presented the case of the Andévalo solar plant in Huelva, the first in Spain to obtain the UNEF Certificate of Excellence in Sustainability, valuing the effort to generate local employment, promoting other sectors, such as livestock. In Andévalo, Iberdrola has also installed 162 hives and has also launched an initiative to study the cultivation of aromatic plants.

About the other pillar of the event, socio-economic impact, another table was held, moderated by JOsé Donoso, General Director of UNEF, in which Antonio Beltrán Mora, Mayor-President of Puebla de Almazán and Fidel Gayoso, Manager of the Society for the Development of the City Council of Carmona, participated.

Antonio Beltrán explained that renewables have been a turning point in our municipality in its economic and social structures "Our territory was depressed and now has expectations of employment and growth thanks to photovoltaics". He also highlighted that photovoltaic plants have allowed us to increase tax revenue "We are a small municipality in which the tax revenue from the plants has helped a lot. These taxes have accounted for up to 40% of the municipal budget that have gone to improving services for residents and quality of life.". In his intervention, he stressed that thanks to this improvement in the services provided by the collection from the photovoltaic plants and the future perspective of attracting new projects, they have made citizens gain in self-confidence. 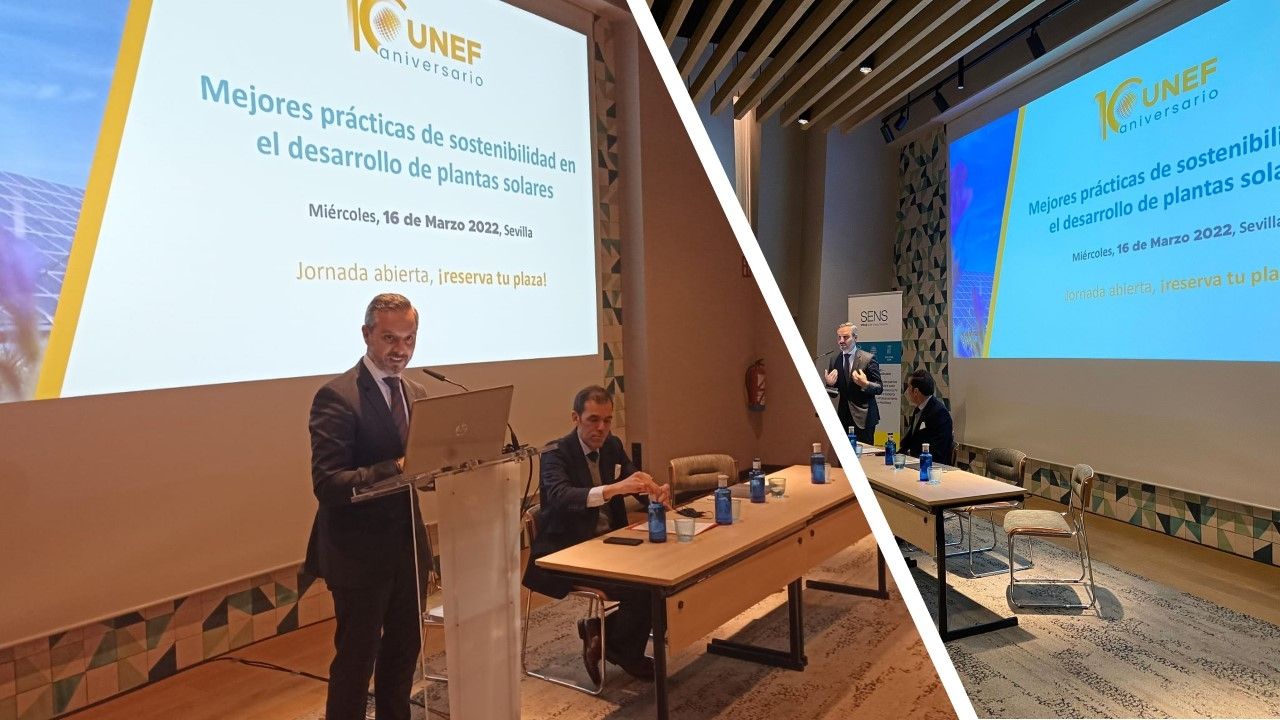 For his part, Fidel Gayoso explained that administrative simplification must continue to maintain renewable deployment. Gayoso has indicated that if all the solar projects that are planned in Carmona are concluded "up to 80 million euros could be captured for the city council with which social housing and recovery of cultural heritage could be made".

All the speakers agreed that the climate emergency involves the development of photovoltaics, so that emissions can be reduced with indigenous, cheap energy that respects the environment and that can contribute to the reindustrialization and economic recovery of the country. To do this, they highlighted that it is essential to integrate the plants in the environment with the best socioeconomic and environmental criteria, generating shared value, reaching alliances with the actors involved and with an effort in communication and awareness with the local community..

In the next table of the day, Alejandro Labanda, Director of Regulation and Studies of UNEF presented the Best Practices Guide prepared by UNEF. This document includes a methodology for the development of solar plants based on the creation of shared value, a list of environmental, social and governance measures and success stories of plants already built in Spain with these principles. For Labanda "What differentiates one development company from another is its reputation and the trust that stakeholders give it.".

Likewise, Angel Collado Environmental Techinician from OPDEnergy pointed out that Spain “can and should be a leading country in environmental integration of photovoltaic installations”. Pablo Gimenez, Project Development Manager, QEnergy closed the table by recalling that the differential value of any company in the sector is to have a close relationship with the city council, establishing a dialogue from the beginning so that the project is well received.

You can download the Guide for Best Sustainability Practices here >

Creation of shared value in the territory

At the last table, Ramón Mateo, Director of beBartlet, a consulting firm specialized in shared value strategies in renewable projects, highlighted the importance of working hand in hand with the territories "from the conviction that the first beneficiaries of solar projects have to be local communities”. For his part, Rafael Serrano, Head of SENS Ibérica Project Development, indicated that "each project is particular and for each one we must find a way to integrate it into the environment, adapting its design and its approach to the territory and the community in which it is locate".

Finally, José Vicente Espino, Delegate of the UNEF in Andalusia, closed the session by recalling that obtaining and maintaining the social license is key for the sector to advance and encouraging the application of best sustainability practices..

About UNEF
The Spanish Photovoltaic Union (UNEF) is the sector association for photovoltaic solar energy in Spain. Formed by more than 650 companies, entities and groups from the entire technology value chain, it represents more than 90% of the sector's activity in Spain and brings together practically all of it: producers, installers, engineering firms, manufacturers of raw materials , modules and components, distributors and consultants. UNEF also holds the presidency and co-secretariat of FOTOPLAT, the Spanish technological photovoltaic platform. The platform brings together universities, research centers and leading photovoltaic R&D companies in Spain.